This book is focused on the theoretical and practical design of reinforced concrete beams, columns and frame structures. It is based on an analytical approach of designing normal reinforced concrete structural elements that are compatible with most international design rules, including for instance the European design rules – Eurocode 2 – for reinforced concrete structures. The book tries to distinguish between what belongs to the structural design philosophy of such structural elements (related to strength of materials arguments) and what belongs to the design rule aspects associated with specific characteristic data (for the material or loading parameters). Reinforced Concrete Beams, Columns and Frames – Mechanics and Design deals with the fundamental aspects of the mechanics and design of reinforced concrete in general, both related to the Serviceability Limit State (SLS) and the Ultimate Limit State (ULS). A second book, entitled Reinforced Concrete Beams, Columns and Frames – Section and Slender Member Analysis, deals with more advanced ULS aspects, along with instability and second-order analysis aspects. Some recent research results including the use of non-local mechanics are also presented. This book is aimed at Masters-level students, engineers, researchers and teachers in the field of reinforced concrete design. Most of the books in this area are very practical or code-oriented, whereas this book is more theoretically based, using rigorous mathematics and mechanics tools. 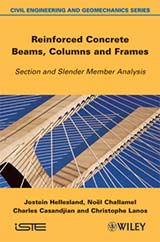