The Explosion of Life Forms 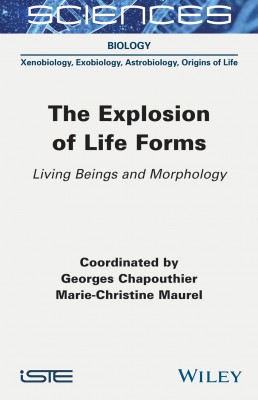 
One of the essential characteristics of living beings is the explosion of variety in their forms that is intrinsically linked to the diversity of the environments they have adapted to.

This book, the result of collaboration between international specialists, analyzes the multiplicity of these morphologies. It explores the origin of forms, their role in defining living things, and the relationship between form and function. It exposes the role of genes and epigenetics and examines the forms of bacteria, protists and plants.

The Explosion of Life Forms also studies the memory of animals and their sensory processes, the forms of robots (built in the image of living things), and medical technologies aimed at restoring damaged living forms.

Finally, this work questions a common principle of construction in the diversity of forms, as well as the idea of an abandonment of the form, a possible hidden defect of some modern philosophies.


1. Possible Traces and Clues of Early Life Forms, Marie-Christine Maurel.
2. The Nature of Life, Andreas Losch.
3. From Form to Function, Jean-Pierre Gasc.
4. On Growth and Form: Context and Purpose, Jean-Pierre Gasc.
5. The Emergence of Form in the History of Epigenetics, Jonathan B. Weitzman.
6. The Many Shapes of Microbial Detection of Kin and Kind, Guillermo Paz-Y-Miño-C and Avelina Espinosa.
7. Development and Evolution of Plant Forms, Florian Jabbour and Guilhem Mansion.
8. Forms of Memory, Robert Jaffard.
9. The Construction of Sensory Universes, Dalila Bovet.
10. Emotional and Social Forms of Robots, Laurence Devillers.
11. When Medical Technology Mimics Living Forms, Didier Fass.
12. From Living to Thinking: Mosaic Architecture, Georges Chapouthier.
13. Converging Technologies or Paradoxes of Power, Jean-Michel Besnier.


Georges Chapouthier is a biologist, philosopher and Emeritus Director of Research at the French National Centre for Scientific Research (CNRS) in France. His research interests focus on animals and the brain.

Marie-Christine Maurel is a Professor at Sorbonne University and a researcher at the Institut de Systématique, Évolution, Biodiversité laboratory at the National Museum of Natural History in France. Her research interests focus on the origins of life, RNA, viroids and molecular archeobiology.