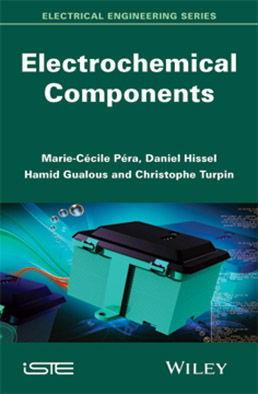 
This book focuses on the methods of storage commonly used in hybrid systems.
After an introductory chapter reviewing the basics of electrochemistry, Chapter 2 is given over to the storage of electricity in the form of hydrogen. Once hydrogen has been made, we have to be able to convert it back into electricity on demand. This can be done with another energy converter: a fuel cell, the subject of Chapter 3. Such a system is unable to deliver significant dynamics in terms of storage and release of electricity and needs to be supplemented with another solution: a detailed study of supercapacitors is provided in Chapter 4.While the storage systems touched upon in the previous three chapters (hydrogen batteries and supercapacitors) both exhibit advantageous characteristics, at present they are still relatively costly. Thus, the days of the electrochemical accumulator by no means appear to be numbered just yet. This will therefore be the topic of Chapter 5. Finally, on the basis of the elements laid down in the previous chapters, Chapter 6 will focus on electrical hybridization of these storage systems, with a view to enhancing the performance (in terms of energy, lifetime, cost, etc.) of the newly formed system.
Aimed at an audience of researchers, industrialists, academics, teachers and students, many exercises, along with corrected solutions, are provided throughout the book.


Marie-Cécile Péra is a Full Professor at the University of Franche-Comte in France and Deputy Director of the FEMTO-ST Institute (CNRS). Her research activities include modeling, control and diagnosis of electric power generation systems (fuel cells – PEMFC and SOFC, supercapacities, batteries) for transportation and stationary applications. She has contributed to more than 180 articles in international journals and conferences.

Hamid Gualous is Full Professor at the University of Caen Lower Normandy in France and director of the LUSAC laboratory. His current research interests include power electronics, electric energy storage, power and energy systems and energy management.
Christophe Turpin is Full Researcher at the CNRS (French National Center for Scientific Research). He is responsible for hydrogen activities within the Laboratory LAPLACE, Toulouse, France. His research activities include the characterization and modeling of fuel cells and electrolyzers, the state of health of these components, and their hybridization with other electrochemical components (ultracapacitors, batteries) within optimized energy systems for stationary and aeronautical applications.