Pluralistic Approach for the Next Generation of Internet 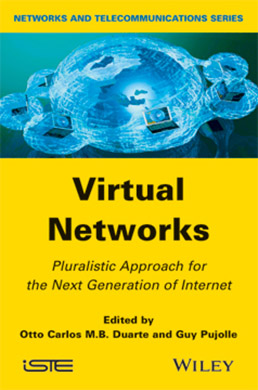 
The first chapter of this title concerns virtualization techniques that allow sharing computational resources basically, slicing a real computational environment into virtual computational environments that are isolated from one another.
The Xen and OpenFlow virtualization platforms are then presented in Chapter 2 and a performance analysis of both is provided. This chapter also defines the primitives that the network virtualization infrastructure must provide for allowing the piloting plane to manage virtual network elements.
Following this, interfaces for system management of the two platforms are proposed in Chapter 3. To control and manage virtual network elements, five primitives that the network virtualization infrastructure must provide are defined: instantiate, delete, migrate, monitor and set.
The book then moves on to survey existing control algorithms for virtual networking. It also describes the main challenges for packet forwarding using Xen as a virtualization tool and describes, in more detail, a proposal for local control of virtual networks. Within each physical node, this proposal guarantees the service level acquired by each virtual network, even in the presence of misbehaving virtual networks.


Otto Carlos M.B. Duarte is Full Professor at Universidade Federal do Rio de Janeiro in Brazil, where he has worked since 1978. His research interests include mobile communications, security, multicast, and QoS guarantees.
Guy Pujolle is currently Professor at University Pierre and Marie Curie (Paris VI) in France and a member of the Scientific Advisory Board of Orange/France Telecom Group. He has published widely in the area of computer systems modeling and performance, queuing theory, high-speed networks, intelligence in networking, wireless networks, and Post-IP networks, including 19 influential texts and monographs in these areas.