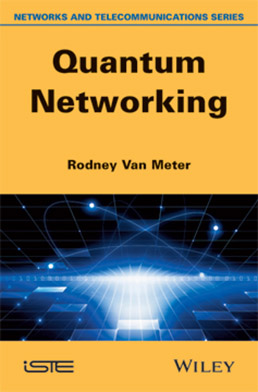 
Quantum repeater networks enable — and depend upon — quantum teleportation to create quantum states over long distances using entanglement (the ability of distant quantum particles to share a state in a way no classical particles can). These networks will enhance classical computer security, improve the sensitivity of telescopes and other scientific instruments, and ultimately connect quantum computers together. With teleportation already demonstrated, repeater links maturing in the lab, and their unentangled cousins already deployed in metropolitan area networks as quantum key distribution systems, we stand on the threshold of a fundamentally new era in communications.
This book brings the reader into this world. It consists of four parts, flowing from background material to the applications of quantum networking, then taking the reader to the leading edge of current research on chaining quantum repeaters together to enable end-to-end quantum communication, before finishing with complex quantum networks consisting of many nodes connected in rich topologies.
The first part includes an overview, followed by three chapters of background on quantum information, classical networking, and quantum teleportation. The second part includes chapters on three classes of applications: quantum key distribution, distributed quantum computation, and the use of entangled states as physical reference frames. The focus then shifts to the bottom of the stack, beginning with physical entanglement experiments, and working up through an error-suppressing technique known as purification, enabling a complete explanation of the primary connection architectures: entanglement swapping, quantum error correction-based and asynchronous. The book finishes with three chapters on issues in multi-user, autonomous networks: multiplexing, routing, and internetworking architecture, featuring the Quantum Recursive Network Architecture (QRNA), followed by a coda discussing future directions for work in the field.