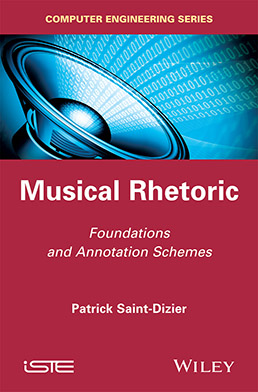 
Rhetoric is the discipline that uses any type of discourse, e.g. spoken, written, gestural, with the aim of persuading an audience to approve a fact, a decision or an attitude.

This book explores the various roles played by music in a rhetoric discourse or in an argumentative construction. Music turns out to be a very strong, persuasive and expressive means of great interest for rhetoric. Its association with a text or, more generally, with conceptual or psychological content is of great interest and importance as an intellectual consideration, and also in a number of everyday-life aspects such as TV news and advertising, shopping mall atmosphere and movie music.

The author develops the computer modeling of a number of simple and relatively commonly accepted aspects of music rhetoric. Therefore, in addition to an analysis of musical features that are important to rhetoric, this book introduces computational formalisms and representations used particularly in computational linguistics which turn out to be appropriate and sufficiently expressive for an analysis of music rhetoric.

Although the reader does require some basic familiarity with music, musical notation and musical score reading, this book is conceived to be accessible to a large audience. Some basic background in linguistics, language and computer science is also required, but the different concepts used are carefully introduced so that the subject can be accessible to a wide audience of musicians, linguists, philosophers and computer scientists.


1. An Introduction to Classical Rhetoric.
2. Language, Music and the Rhetoric Discourse.
3. The Symbolism of Musical Elements.
4. Feature Structures for Representing Musical Constructions.
5. A Rhetoric Analysis of Musical Works.