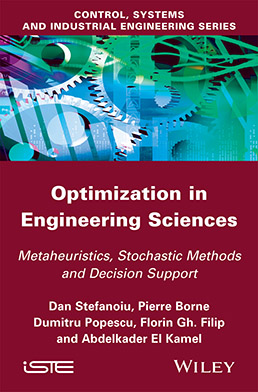 
This book presents the main metaheuristics and approximate and stochastic methods for the optimization of complex systems in Engineering Sciences. It has been written within the framework of the European Union project ERRIC (Empowering Romanian Research on Intelligent Information Technologies), which is funded by the EU’s FP7 Research Potential program and has been developed in co-operation between French and Romanian teaching researchers. Through the principles of various proposed algorithms (with additional references) this book allows the reader to explore various methods of implementation such as metaheuristics, local search and population-based methods. It examines multi-objective and stochastic optimization, as well as methods and tools for computer-aided decision-making and simulation for decision-making.
Throughout the book, various examples are presented, in order to illustrate the proposed methods, while the possible application fields of the concerned algorithms are indicated.


Dan Stefanoiu is Professor in the fields of Signal Processing and System Identification at Politehnica University of Bucharest. In 2002 he was elected as a member of the American Romanian Academy of Arts and Sciences (ARA).
Pierre Borne is Professor at École Centrale de Lille, France. He has received honorary degrees from the University of Moscow, Russia, the Politehnica University of Bucharest, Romania, and the University of Waterloo, Canada. He is a Fellow of the IEEE.
Dumitru Popescu is Professor at Politehnica University of Bucharest, Romania, in the fields of Advanced Control and Systems Optimization and also Associate Professor at major universities in France and Italy. He is Director of the Research Center in Automatics, Process Control and Computers (APCC) affiliated to Politehnica University of Bucharest, a member of the IFAC Technical Committees for the Control of Bioprocesses and Chemical Processes and a corresponding member of the Romanian Academy of Technical Sciences.
Florin Gh. Filip is a researcher and Professor in the fields of Optimization and Control of Large-scale Systems, applied IT including decision support systems. He was elected as a member of the Romanian Academy (National Academy of Sciences of Romania) in 1991 and President of the “Information Science and Technology” section of the Academy in 2011. He was the Vice President of the Romanian Academy from 2001 to 2010 and the chair of the IFAC TC 5.4 "Large-scale complex systems" from 2002 to 2008.
Abdelkader El Kamel is Professor in the fields of Advanced Control, System Optimization and Decision-Making at École Centrale de Lille in France. He is also a regular Visiting Professor, mainly in China, Chile and at major engineering and business schools in Tunisia. 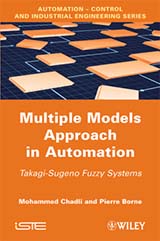