FOCUS Series in Networks and Telecommunications 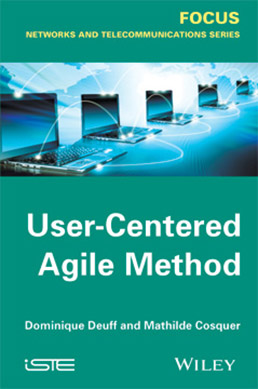 
Agile development methods began to emerge around 20 years ago. However, it was not until the early 2000s that they began to be widely used in industry. This growth was often due to the advent of Internet services requiring faster cycles of development in order to heighten the rate at which an ever-greater number of functionalities were made available. In parallel, user-centered design (UCD) methods were also becoming more and more widely used: hence, user-centered design and agile methods were bound to cross paths, at least in the telecoms industry! During this period, in the field of telecommunications, the explosion in the number of connected terminals, Web applications, new use environments (particularly in a domestic setting), etc., meant it was crucial to gain a fuller understanding of users’ requirements and better evaluate the relevance and acceptance of services’ attempts to cater for these requirements. Thus the user-centered agile method, as proposed in this book, aims to mutually integrate two existing methods: user-centered design – as used by ergonomists – and the agile Scrum method – as used by developers. The user testing method is also covered. Analyzing work on this subject spanning the past 10 years, the authors also provide an assessment of the feedback on the user-centered agile method. The method described in this book has been based on all these sources. It is a framework relying on the logic introduced by Scrum, i.e. a framework based on project management. The method proposed is seen as an extension of Scrum which is “centered on humans” because of the integration of user-centered design and user-testing. Therefore the description of the user-centered agile method is based on the basics of the agile Scrum method and uses its terminology and elements. As well as descriptive elements of the user-centered agile method, practical examples of how to implement it are also provided.


1. Introduction.
2. Intrioduction to the Methods Employed.
3. Sources for this Work.
4. Description of The User-Centered Agile Method.
5. Case Studies.


Dominique Deuff worked at the National Institute of Informatics in Japan for 2½ years before coming back to France in June 2006 and joining Orange Labs France Telecom as a developer in a Scrum team. In 2008, she graduated with a Master’s degree in ergonomics and has since then been applying her new skills to various projects at Orange Labs Lannion.
Mathilde Cosquer joined Orange Labs as an ergonomist after completing her PhD on the question of transparency of technical devices from the user’s point of view. She has taken part in the design and evaluation of numerous innovating services, but over the past four years, she has been more particularly involved in projects of interpersonal communication services.