Fundamentals of Instrumentation and Measurement 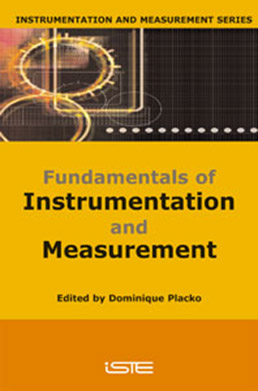 
This title presents the general principles of instrumentation processes. It explains the theoretical analysis of physical phenomena used by standard sensors and transducers to transform a physical value into an electrical signal. The pre-processing of these signals through electronic circuits – amplification, signal filtering and analog-to-digital conversion – is then detailed, in order to provide useful basic information. Attention is then given to general complex systems. Topics covered include instrumentation and measurement chains, sensor modeling, digital signal processing and diagnostic methods and the concept of smart sensors, as well as microsystem design and applications. Numerous industrial examples punctuate the discussion, setting the subjects covered in the book in their practical context.


Dominique Placko is Professor at the Department of Electrical Engineering at the Ecole Normale Supérieure de Cachan, France, where he teaches applied physics and electronic sciences. He is the writer of over 100 scientific papers in the past 25 years, including contributions to international journals and conferences. He has also published eight books and is co-inventor for 15 patents. He received the Blondel award in 1998.