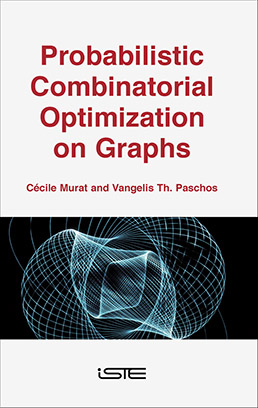 
This title provides a comprehensive survey over the subject of probabilistic combinatorial optimization, discussing probabilistic versions of some of the most paradigmatic combinatorial problems on graphs, such as the maximum independent set, the minimum vertex covering, the longest path and the minimum coloring. Detailed discussion is given to a priori optimization, which is adopted as the main working hypothesis: starting from an a priori solution of a ‘super instance’ of a problem, where any datum is present with a certain probability, this hypothesis consists of creating modifications in order to fit the real instance to be optimized: that is, a sub-instance of the super instance.

The main objective of the a priori optimization is the determination of a solution of the initial instance, known as the a priori solution, so that its restriction to the offensive instance is optimized, and the determination of the complexity of its computation. The text also includes a list of combinatorial optimization graph-problems together with a characterization of their optimal a priori solution. Those who possess a sound knowledge of the subject mater will find the title of great interest, but those who have only some mathematical familiarity and knowledge about complexity and approximation theory will also find it an accessible and informative read.

Vangelis Th. Paschos is Professor of Computer Science at the University of Paris-Dauphine and Chairman of the LAMSADE (Laboratory for the Modeling and the Analysis of Decision Aiding Systems). His research interests include complexity theory, the theory of the polynomial approximation of NP-hard problems, probabilistic combinatorial optimization and on-line computation. He is the author of more than a 100 research papers and is a member of the editorial board of several international scientific journals.