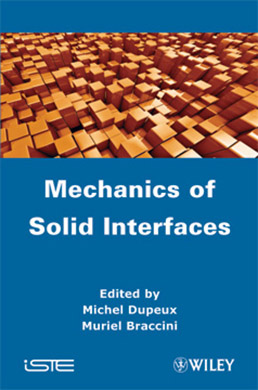 
The growing occurrence of heterogeneous materials such as composites or coated substrates in structural parts makes it necessary for designers and scientists to deal with the specific features of the mechanical behavior of solid interfaces. This book introduces basic concepts on mechanical problems related to the presence of solid/solid interfaces and their practical applications. The various topics discussed here are the mechanical characterization of interfaces, the initiation and growth of cracks along interfaces, the origin and control of interface adhesion, focusing in particular on thin films on substrate systems. It is designed and structured to provide a solid background in the mechanics of heterogeneous materials to help students in materials science, as well as scientists and engineers.


Muriel Braccini has been a CNRS research fellow since 2002. Her scientific interest rests in interface adhesion in heterogeneous materials. Her principal activities deal with the microstructure/properties relationship approach for non-organic materials.
Michel Dupeux was appointed Assistant Lecturer in 1970, then became Lecturer at Grenoble Institut National Polytechnique, then finally Professor at Joseph Fourier University in Grenoble in 1989. His scientific interest rests in the micro-mechanical behavior of heterogeneous materials and interfaces, covering physical, chemical and structural aspects. He retired in 2009, but still keeps up an interest in his original scientific field and some scientific activity (textbook writing, textbook translation from English to French).