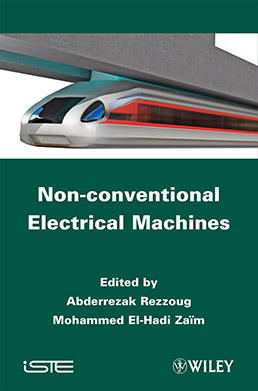 
Electromagnetic conversion, involving using mechanical actions to create electricity via piezoelectric technology and the reverse of creating mechanical actions through electrical signals, is experiencing a wave of new applications, practically in the areas of power generation and transportation. Electromagnetic conversion chains have seen their field of application extended throughout industry. Requirement specifications, which are becoming increasingly strong, are inducing new research into each element of the chain, especially into the electrical machines in the chain.

The definition of non-conventional machines is a fluid one, depending on their function, the safety index that must be achieved, the dynamics of their response, and the performances they could reach (power density, torque density). These new functions and performances can be reached through new topologies of machines, new materials such as superconductors, or materials with improved characteristics such as permanent magnets or ferromagnetic materials. The studies of these machines are often based on complex designs that involve many disciplines and greatly benefit from the development of methods and computational tools.

Following a chapter devoted to basic theoretical tools and material properties, this book is devoted to three families of rotating machines defined through their functions (slow speeds and high speed) or through materials (superconductors).

Mohammed El-Hadi Zaïm is Professor in the Department of Electrical Engineering at Polytech’Nantes, at Nantes University, France. He is engaged in the research and development of electrical machines design, particularly in the fields of permanent magnets and solid-rotor high-speed synchronous machines and reluctance machines for low speed applications.