From Euclidean to Hilbert Spaces


Introduction to Functional Analysis and its Applications 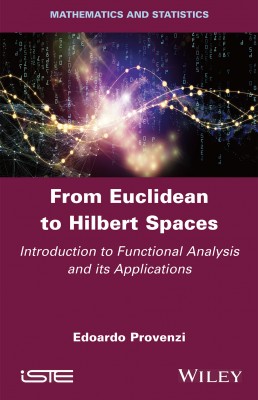 
From Euclidian to Hilbert Spaces analyzes the transition from finite dimensional Euclidian spaces to infinite-dimensional Hilbert spaces, a notion that can sometimes be difficult for non-specialists to grasp. The focus is on the parallels and differences between the properties of the finite and infinite dimensions, noting the fundamental importance of coherence between the algebraic and topological structure, which makes Hilbert spaces the infinite-dimensional objects most closely related to Euclidian spaces.

The common thread of this book is the Fourier transform, which is examined starting from the discrete Fourier transform (DFT), along with its applications in signal and image processing, passing through the Fourier series and finishing with the use of the Fourier transform to solve differential equations. The geometric structure of Hilbert spaces and the most significant properties of bounded linear operators in these spaces are also covered extensively.

The theorems are presented with detailed proofs as well as meticulously explained exercises and solutions, with the aim of illustrating the variety of applications of the theoretical results.


Edoardo Provenzi is Professor of Mathematics at the University of Bordeaux, France. He studies visual phenomena and their applications in image processing and computer vision, employing tools from differential geometry, harmonic analysis and mathematical physics.