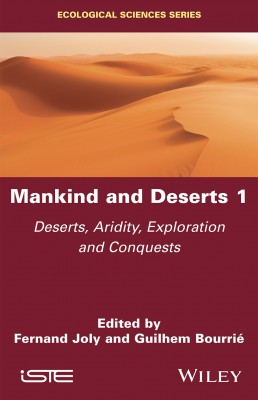 
The wild beauty of deserts has always been a source of fascination the world over. Mankind and Deserts 1 – the first of three volumes – describes their location and geographic variety. There are both hot and cold deserts, those at high altitude or those at sea level, differing in climate but sharing the scarcity of water, extreme temperatures and often violent winds.

According to paleoclimate evidence, however, deserts have not always been as arid as they are today. Deserts were a source of inspiration for many spiritual leaders, among them, Moses, Jesus and Muhammad; as well as conquerors, from Alexander the Great to Genghis Khan. Some avoided these deserts, or crossed them as fast as they could. Others adapted to them and developed vibrant civilizations and cities.

From ancient, almost mythical, exploration to modern scientific studies, deserts have come to be better known yet still hold great appeal. This book traces the history of their knowledge while providing a basis for understanding their features and the tools needed for their protection, in an ever-changing world.


Fernand Joly (1917–2010) studied the Sahara at the Institut Scientifique Chérifien (Institut Scientifique de Rabat) in Morocco. He then entered the CNRS and Paris VII University, where he developed geomorphology and guidelines for cartography, pioneering digital data treatment. He is the author of Glossaire de géomorphologie.

Guilhem Bourrié, a member of the Académie d’Agriculture de France, is a pedologist and geochemist. He has worked on water quality in soils in Brittany, Provence, Algeria, Brazil, Chile and Mexico.