Mechanics and Physics of Solids at Micro- and Nano-Sscales 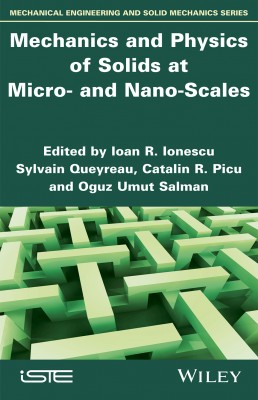 
Chronicling the 11th US–France “Mechanics and physics of solids at macro- and nano-scales” symposium, organized by ICACM (International Center for Applied Computational Mechanics) in Paris, June 2018, this book addresses the breadth of issues raised. It covers a comprehensive range of scientific and technological topics (from elementary plastic events in metals and materials in harsh environments to bio-engineered and bio-mimicking materials), offering a representative perspective on state-of-the-art research and materials.

Expounding on the issues related to mesoscale modeling, the first part of the book addresses the representation of plastic deformation at both extremes of the scale – between nano- and macro- levels. The second half of the book examines the mechanics and physics of soft materials, polymers and materials made from fibers or molecular networks.


Ioan R. Ionescu is Professor at University Paris 13 and at LSPM (Laboratory of Processes and Materials Sciences) of CNRS, Villetaneuse, France. His research focuses on computational solid-mechanics, damage, plasticity, friction and solid-Earth geophysics.

Sylvain Queyreau is Associate Professor at University Paris 13 with a CNRS Chair of Excellence at LSPM. His research focuses on atomic and mesoscopic simulations of the plastic behavior, microstructural evolution and fracture initiation in crystalline materials.

Catalin R. Picu is Professor and Associate Head of Undergraduate Studies in Mechanical, Aerospace and Nuclear Engineering at Rensselaer Polytechnic Institute, Troy, New York. His research focuses on mechanics and solids, micro- and nano-mechanics of crystalline defects and atomistic simulations.

Oguz Umut Salman is a CNRS Researcher at LSPM and a Lecturer at University Paris 13. His research focuses on materials science, plasticity, fractures, phase transitions and bio-mechanics.