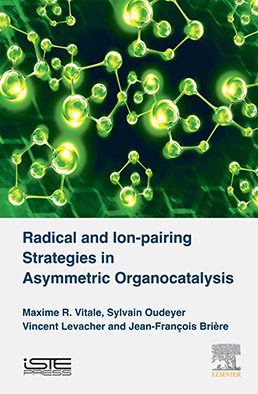 
Considering the challenge of sustainability facing our society in the coming decades, catalysis is without any doubt a research area of major importance. In this regard, asymmetric organocatalysis, now considered a pillar of green chemistry, deserves particular attention.

The first chapter of this volume examines the topic of asymmetric organocatalysis in light of radical chemistry. Recent important progress in this field has been attained by promoting the formation and harnessing the high reactivity of open-shell intermediates. Merging organocatalysis with radical chemistry has been the key to solving some longstanding bottlenecks, and has also significantly contributed to reinforcing the key role of organocatalysis in asymmetric catalysis. This chapter presents the most significant developments in this area, with a particular focus on asymmetric SOMO- and photoredox-organocatalyzed transformations.

Chapter 2 focuses on quaternary ammonium salts (R4N+X-), especially chiral derivatives, and their behavior as unique catalysts in organocatalysis. Forming chiral ion-pairs capable of promoting asymmetric reactions, they also operate as unique “transporters” involved in phase transfer catalytic processes between liquid–liquid or liquid–solid systems. Furthermore, they offer unique opportunities when forming cooperative ion-paired entities R4N+X-, allowing a synergistic implication of the counter-ion X- either as Brønsted bases or Lewis bases. Specific design of such chiral catalysts in modern chemistry and better insight into their mode of activation facilitates efficient and unprecedented chemical transformations. This chapter provides an overview of the use of chiral quaternary ammonium salts in organocatalysis, emphasizing both general mechanistic aspects and the scope of this approach.

Sylvain Oudeyer is a lecturer at the University of Rouen Normandy (Organocatalysis axis - heterocycles team).

Vincent Levacher is head of the heterocycles team in the COBRA laboratory at the University of Rouen Normandy.

Jean-François Brière is CNRS researcher in the COBRA laboratory at the University of Rouen Normandy (Organocatalysis axis - heterocycles team).