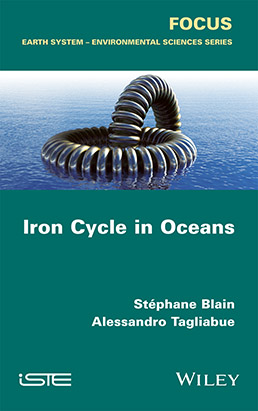 
Modern marine iron biogeochemistry has developed from the first reports of iron concentrations in seawater in the 1980s to a broad, mature scientific field, driven by a community of researchers studying many diverse aspects of iron cycling in the oceans. Research looks at the role of iron from numerous perspectives and in multiple areas, from the genetic to the earth system, and from the atmosphere to the deep ocean.

This book first details the fundamental properties of iron in seawater, as well as essential definitions, in Chapter 1. Chapters 2 and 3 cover the methods and tools that can be used to study marine iron biogeochemistry, including both analytical and modeling methods. The various pathways by which iron can enter the ocean are explored in Chapter 4, before Chapter 5 looks at the transformations iron undergoes once in the ocean, and the different iron cycles that occur. Processes that determine iron distribution in the ocean are described in Chapter 6, and Chapter 7 presents “the iron hypothesis”, a key influence in the formation of this research field, and the implications of iron fertilization of the oceans on a large scale in the context of climate engineering.


Stéphane Blain is Professor at University Pierre and Marie Curie in France. He is interested in different aspects of iron biogeochemistry and in the functioning of the marine biological carbon pump of CO2, particularly in the Southern Ocean.
Alessandro Tagliabue is a lecturer at the University of Liverpool in the UK.