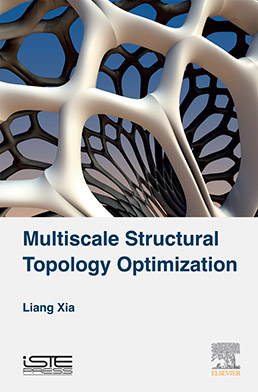 
In recent years, there has been an increasing use of high-performance heterogeneous materials such as fibrous composites, concrete, metallic porous materials and metal alloys for their advantageous overall characteristics, which result in superior structural mechanical responses and service performance. Though from a structural point of view these materials can be considered homogeneous and conventional design approaches for homogeneous structures can still be used, the pronounced heterogeneities have a significant impact on the structural behavior. Therefore, in order to allow for reliable mechanical designs, one needs to account for material microscopic heterogeneities and constituent behaviors so as to accurately assess the structural performance.

This book initially discusses the topology optimization design of nonlinear highly heterogeneous structures. Generally speaking, topology optimization design of multiscale structures can be viewed as an extension of conventional monoscale designs, except that the material constitutive law is governed by one or multiple Representative Volume Elements (RVEs) defined at the microscopic scale.

Finally, computer codes are developed for the designs of nonlinear structures and materials with extreme constitutive properties. The compactly developed codes including all ingredients for topology optimization should be beneficial in terms of presenting the methods and attracting more research interest.


Liang Xia is a postdoctoral researcher in computational mechanics at the Laboratory of Multiscale Modelling and Simulation, University of Paris-Est, France. His research interests cover structural topology optimization, multiscale modeling and model order reduction. He is the author and co-author of 17 peer reviewed journal papers.