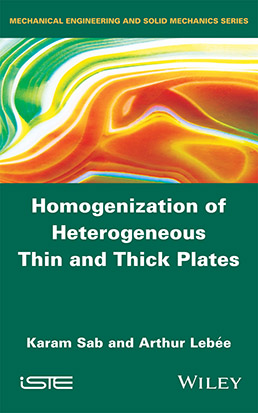 
This book gives new insight on plate models in the linear elasticity framework taking into account heterogeneities and thickness effects. It is targeted at graduate students who want to discover plate models, but also deals with the latest developments in higher order models.

Plate models are both an ancient matter and a still active field of research. First attempts date back to the beginning of the 19th Century with Sophie Germain. Very efficient models have been suggested for homogeneous and isotropic plates by Love (1888) for thin plates, and Reissner (1945) for thick plates. However, the extension of such models to more general situations, such as laminated plates with highly anisotropic layers, and periodic plates, such as honeycomb sandwich panels, raised a number of difficulties. An extremely wide literature is available on these questions, from very simplistic approaches, which are very limited, to extremely elaborate mathematical theories.

Starting from continuum mechanics concepts, this book introduces plate models of progressive complexity and rigorously tackles the influence of the thickness of the plate and of the heterogeneity. It also provides the latest research results on that matter. The authors give a comprehensive view of rigorously established models accessible to both students and researchers. The majority of the book deals with a new theory which is the extension to general situations of the well-established Reissner–Mindlin theory. These results are completely new and give a fresh insight into some aspects of plate theories which have, until recently, been controversial.

Arthur Lebée is a researcher at Laboratoire Navier, in France. His main topics concerns homogenization of structures, generalized continua and also origami. He is interested in applications in civil engineering.