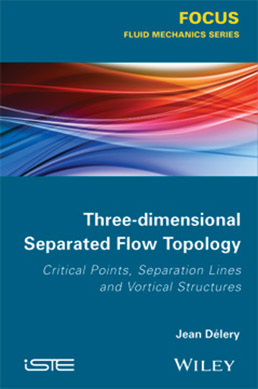 
This book develops concepts and a methodology for a rational description of the organization of three-dimensional flows considering, in particular, the case where the flow is the place of separations. The descriptive analysis based on the critical point theory of Poincaré develops conventional but rather unfamiliar considerations from aerodynamicists, who face the understanding of complex flows including multiple separation lines and vortices. These problems concern industrial sectors where aerodynamics plays a key role, such as aerospace, ground vehicles, buildings, etc.


1. Skin Friction Lines Pattern and Critical Points.
2. Separation Streamsurfaces and Vortex Structures.
3. Separated Flow on a Body.
4. Vortex Wake of Wings and Slender Bodies.
5. Separation Induced by an Obstacle or a Blunt Body.
6. Reconsideration of the Two-Dimensional Separation.
7. Concluding Remarks.


Jean Délery is a Supaero (French National Higher School of Aeronautics and Space) engineer who has worked at Onera (French national aerospace research center) since 1964. He has participated in several major French and European aerospace programs, is the author of many scientific publications, and has occupied various teaching positions particularly at Supaero, the University of Versailles-Saint-Quentin, Ecole polytechnique in France and “La Sapienza” University in Rome, Italy. He is currently emeritus adviser at Onera.