The value of simplicity 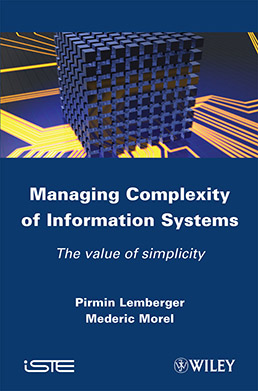 
This book is about complexity in Information Systems (IS). The subject is addressed from both conceptual and applied perspectives. Concepts are drawn from information theory, industrial design and software engineering. Its content capitalizes on experiences gathered by the authors during various contracting jobs involving software architecture, modeling and IS architecture that were conducted for large organizations in the banking and industry sectors, as well as in the public sector.

The authors develop the point of view according to which mastering complexity involves two essential steps: first, one should develop a clear understanding of the real nature of complexity within the IS; second, one should identify the primary causes which contribute to its uncontrolled growth and organize these into a logical framework, in order to define efficient countermeasures. Both technical and psychological causes of complexity are to be considered. Two themes make up the main thread of the book: complexity and value. Both themes are quite common when considered separately, but their interplay remains a largely unexplored topic. The analysis of this interplay is one of the sources of originality of this book.


Pirmin Lemberger is a senior architect at Alcyonix, SQLI’s Group Consulting branch. He has worked for numerous companies and administrations both in France and Switzerland. He is an expert in IS modeling and has played a leading role in helping several companies (banking and industry) setup an SOA architecture using UML as a core methodology.

Médéric Morel is Managing Director of Alcyonix, SQLI’s Group Consulting branch. He has co-written three books and is a regular speaker at international IT conferences. Before joining Alcyonix, he co-founded the IT consulting firm Neoxia in 2000 and was its CTO until 2006. He has also participated in numerous IS projects for companies and administrations in Europe and North Africa.