Electrical drive control is well known for regulating the magnetic flux and torque.

These controls also use some electrical and mechanical variables that are not directly measurable. The authors, with great experience in the domains of research, teaching and industrial applications, develop methods and realizations in identification, estimation and observation.

This book will hold great interest for scientific and industrial researchers in the field of variable speed drives.


Bernard de FORNEL: Professor, Engineer and doctor in Sciences in the school ingeneering ENSEEIHT in Toulouse, he was specialised in the variable speed drives of the electrical machines in his teaching, his research. He managed several industrial contracts with some aeronautic al and railway industries. More 150 papers are published in reviews and conferences. He was director of about 50 doctorat thesis. 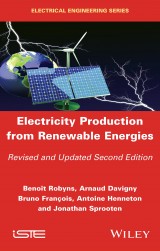