Science–Industry Relationships in the Face of Forced Advancement 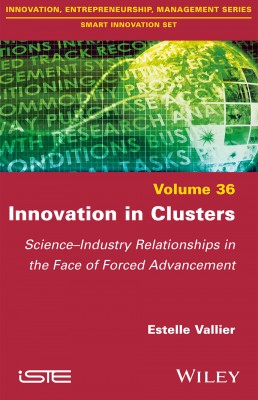 
Forged at the heart of international political bodies by expert researchers, the innovation cluster concept has been incorporated into most public policies in industrialized countries. Based largely on the ideas behind the success of Silicon Valley, several imitative attempts have been made to geographically group laboratories, companies and training in particular fields in order to generate “synergies” between science and industry.

In its first part, Innovation in Clusters analyzes the infatuation with the system of clusters that is integral to innovative policies by analyzing its socio historical context, its revival in management and its worldwide expansion, looking at a French example at a local level. In its second part, the book explores a specialized biotechnology cluster dating back to the end of the 1990s. The sociological survey conducted twenty years later sheds a different light on the dynamics and relationships between laboratories and companies, contradicting the commonly held belief that innovation is made possible by geographical proximity.


Part 1. Persistence and Renewal of the Cluster Concept in Contemporary Innovation Policies
1. From Industrial Districts to Knowledge Valleys: the Legacy of theCluster.
2. The Management Roots of the Cluster and Its Worldwide Dissemination.
3. The Cluster Imaginary: Tools, Local Narrative and Promise.


Estelle Vallier is a sociologist at the Gustave Roussy Institute, France, and works within the Research Chair on Social Issues in Personalized Medicine and Innovation in Cancerology, part of the Centre Léon Bérand and Université Lyon 1. She is also an associate researcher at the Centre Pierre Naville at the Université d’Évry–Paris Saclay.