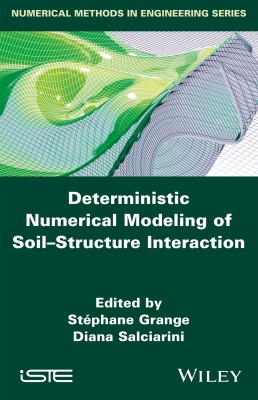 
In order to describe soil–structure interaction in various situations (nonlinear, static, dynamic, hydro-mechanical couplings), this book gives an overview of the main modeling methods developed in geotechnical engineering. The chapters are centered around: the finite element method (FEM), the finite difference method (FDM), and the discrete element method (DEM).

Deterministic Numerical Modeling of Soil–Structure Interaction allows the reader to explore the classical and well-known FEM and FDM, using interface and contact elements available for coupled hydro-mechanical problems. Furthermore, this book provides insight on the DEM, adapted for interaction laws at the grain level. Within a classical finite element framework, the concept of macro-element is introduced, which generalizes constitutive laws of SSI and is particularly straightforward in dynamic situations. Finally, this book presents the SSI, in the case of a group of structures, such as buildings in a town, using the notion of metamaterials and a geophysics approach.


Stéphane Grange is a Professor at the INSA in Lyon, France, and Director of the GEOMAS Civil Engineering Laboratory. His research focuses on the dynamic behavior of structures in interaction with their environment.

Diana Salciarini is Associate Professor at the University of Perugia, Italy. Her research topics include: the analysis of soil–structure interaction phenomena under dynamic loading conditions, and coupled problems in geo-structure behavior under thermal cycles.