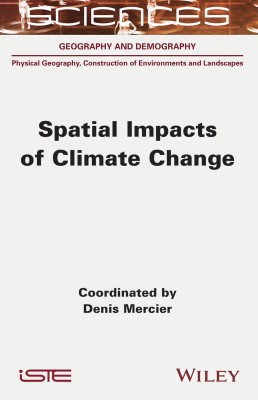 
Climate change has been a central concern over recent years, with visible and highly publicized consequences such as melting Arctic ice and mountain glaciers, rising sea levels, and the submersion of low-lying coastal areas during mid-latitude and tropical cyclones.

This book presents a review of the spatial impacts of contemporary climate change, with a focus on a systematic, multi-scalar approach. Beyond the facts – rises in temperature, changes in the spatial distribution of precipitation, melting of the marine and terrestrial cryosphere, changes in hydrological regimes at high and medium latitudes, etc. – it also analyzes the geopolitical consequences in the Arctic and Central Asia, changes to Mediterranean culture and to viticulture on a global scale, as well as impacts on the distribution of life, for example, in the Amazon rainforest, in large biomes on a global scale, and for birds.


Denis Mercier is Professor of Geography at Sorbonne University and a member of the Laboratory of Physical Geography: Quaternary and Current Environments. His research focuses on the impacts of climate change on the polar environment and the risks of flooding and sea submergence.