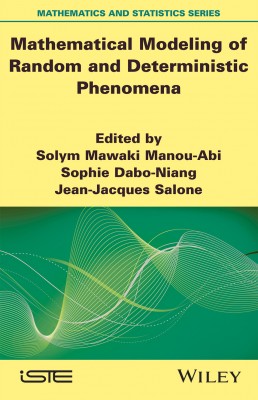 
This book highlights mathematical research interests that appear in real life, such as the study and modeling of random and deterministic phenomena. As such, it provides current research in mathematics, with applications in biological and environmental sciences, ecology, epidemiology and social perspectives.

The chapters can be read independently of each other, with dedicated references specific to each chapter. The book is organized in two main parts. The first is devoted to some advanced mathematical problems regarding epidemic models; predictions of biomass; space-time modeling of extreme rainfall; modeling with the piecewise deterministic Markov process; optimal control problems; evolution equations in a periodic environment; and the analysis of the heat equation. The second is devoted to a modelization with interdisciplinarity in ecological, socio-economic, epistemological, demographic and social problems.

Mathematical Modeling of Random and Deterministic Phenomena is aimed at expert readers, young researchers, plus graduate and advanced undergraduate students who are interested in probability, statistics, modeling and mathematical analysis.

Part 2. Some Topics on Mayotte and Its Region
9. Towards a Methodology for Interdisciplinary Modeling of Complex Systems Using Hypergraphs, Jean-Jacques Salone.
10. Modeling of Post-forestry Transitions in Madagascarand the Indian Ocean: Setting Up a Dialogue Between Mathematics, Computer Science and Environmental Sciences, Dominique Hervé.
11. Structural and Predictive Analysis of the Birth Curve in Mayotte from 2011 to 2017, Julien Balicchi and Anne Barbail.
12. Reflections Upon the Mathematization of Mayotte’s Economy, Victor Bianchini and Antoine Hochet.


Solym Mawaki Manou-Abi is an Associate Professor at Centre Universitaire de Mayotte, France. He is a doctor of applied mathematics, and his research interests are in mathematics and applications – specifically probability, analysis and statistics.

Sophie Dabo-Niang is a Full Professor at the University of Lille, France. She is a doctor of statistics and her research program is focused on the study of non(semi)-parametric inference of functional and spatial data. She is interested in medical, environmental and hydrological studies from an applied perspective.

Jean-Jacques Salone is an Associate Professor at Centre Universitaire de Mayotte. He is a doctor of applied mathematics and education sciences, and his research interests are in didactics of mathematics and in modeling of social, natural or educational complex systems.