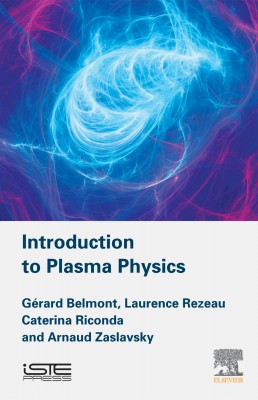 
Plasmas are not very present in our immediate environment and their properties are sometimes even ignored by physicists. These media however involve universal phenomena that are encountered in many areas, from electric discharges to galactic jets.

The aim of this book is to offer an introduction to the various phenomena that govern plasma physics. It presents the foundations of the plasma physics theory, in parallel with some applications in the domains of laboratory and natural plasmas. The only prerequisite to reading this book is to have some knowledge of basic physics.

Particular attention is paid to the existence of non-collisional plasmas, in which the collective behavior of the medium is only due to the average electromagnetic field, which dominates particle trajectories. This allows revisiting notions already investigated in other disciplines, and facilitates the understanding of the links that exist between kinetic and fluid theories, particularly regarding the study of wave propagation.


1. What Is Plasma?
2. Individual Trajectories in an Electromagnetic Field.
3. Kinetic Theory of Plasma.
4. Plasma Fluid Modeling and MHD Limit.
5. Waves in Plasmas in the Fluid Approximation.
6. Kinetic Effects: Landau Damping.
7. Shockwaves and Discontinuities.


Gérard Belmont is Emeritus Researcher at CNRS, France. His main research interest is in space plasmas and their different descriptions, kinetic and fluid, of non-collision plasmas.

Laurence Rezeau is Professor of Astrophysics at Sorbonne University, France. Her main research interest is in the interactions between solar wind and the Earth.

Caterina Riconda is Professor of Physics at Sorbonne University, France. Her main research interest is in the theory and simulations of laser-plasma interaction.

Arnaud Zaslavsky is Maître de Conférences in Physics at Sorbonne University, France. His main research interest is in astrophysical plasmas.