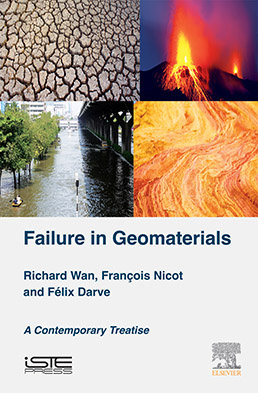 
Failure in Geomaterials offers a unified view of material failure as an instability of deformation modes framed within the theory of bifurcation.

Using mathematical rigor, logic, physical reasoning and basic principles of mechanics, the authors develop the fundamentals of failure in geomaterials based on the second-order work criterion. Various forms of rupture modes and material instabilities in granular materials are explored both analytically and numerically with lab experimental observations on sand as a backdrop. The authors provide a clear picture of inelastic deformations and failure of geomaterials under various loading conditions.

A unique feature of the book is the systematic application of the developed theory to the failure analysis of some selected engineering problems such as soil nailing, landslides, energy resource extraction, and internal erosion in soils.


Richard Wan is Professor with the Department of Civil Engineering at the University of Calgary, Canada. He sits on the Editorial Board of several international journals and was the Vice-Chair of the TC103 (Numerical Methods) of the ISSMGE from 2009-2017.

François Nicot is Research Professor and the head of the Geomechanics group at IRSTEA (National Research Institute of Science and Technology for Environment and Agriculture), Grenoble, France. He is the Editor in Chief of the European Journal of Environmental and Civil Engineering.

Félix Darve is Professor Emeritus at the University of Grenoble-Alpes, Institut Polytechnique de Grenoble, France. He is the Editor in Chief of the International Journal for Numerical and Analytical Methods in Geomechanics.