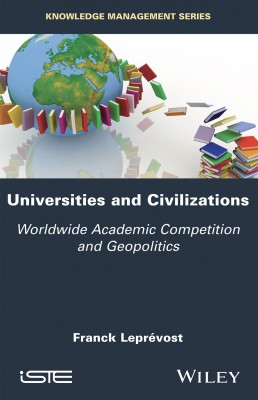 
Since the publication of the first Shanghai ranking in 2003, the international rankings of universities have become ever-more important. This book examines the evolution of higher education systems and the role of universities in contemporary societies, which are marked by increased competition and tensions.

Investigating whether the dynamism of large universities is an accurate indicator of the intellectual life of their civilizations, Universities and Civilizations systematically analyzes the evolution of universities in several main rankings, from their creation until now.

This book suggests an overhaul of traditional models of academic cooperation and exchange in an era of growing international tensions and a time when people and knowledge are increasingly mobile.

- Jamil Sali, International expert in the transformation of universities “A fascinating book that paints an original picture of internal rankings and higher education, skillfully mixing geopolitics, the academic world and belles-lettres.”

- Erna Hennicot-Schoepges, Former Minister of Higher Education, Research and Culture of Luxembourg: “Universities – ivory towers or the center of society’s evolution? This book asks the right questions and warns against false conclusions on international rankings. A reference book for decision-makers!”

- Hilligje van’t Land, Secretary General, International Association of Universities: “Here is an original book that offers a rich, explosive perspective on the academic world, rankings and the raison d’être of the so-called ‘elite’ universities. It was a pleasure to read this work, which raises real questions about the challenges posed by the uncertain future that lies ahead of us, and the role that these universities have to play in order to best respond to them.”

- Antoine Petit, CNRS President, “An exciting insight into universities around the world.”


Franck Leprévost is an internationally renowned scientist and Professor at the University of Luxembourg, of which he was Vice-President from 2005 to 2015. His expertise in academic positioning and strategy is sought after by many universities, institutions and governments.